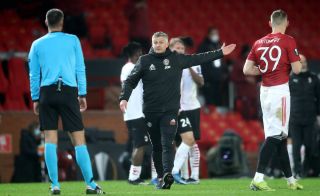 Referee Slavko Vinčić made a couple of grave errors during AC Milan’s 1-1 draw against Manchester United on Thursday night, according to a report.

Amad Diallo scored the opener for United with a back-peddling header, but Simon Kjaer provided some 92nd-minute heroics to head home a corner and secure a vital away goal.

Milan had the ball in the net in the 11th minute as Kessie took a touch from a throw-in and thumped the ball into the far corner as it sat up for him nicely just inside the box. However, VAR decided to intervene for handball, though the replay made it look like a questionable call.

La Gazzetta dello Sport (via Football Italia) have described Kessiè’s disallowed goal as ‘a mystery’ because there were no clear images that showed the Ivorian touch the ball with his arm at any point. The paper adds that VAR may have seen a different replay, but the system is designed only to intervene in the case of ‘clear and obvious error’, which there did not seem to be.

Vinčić also should have given United midfielder Scott McTominay his marching orders for a second bookable offence when he intentionally fouled Rade Krunic on the edge of the box by hauling him down, having already been given a yellow card.

The referee was rated 5/10 by La Gazzetta dello Sport and Tuttosport and 6/10 by il Corriere dello Sport, as per the report on Football Italia.