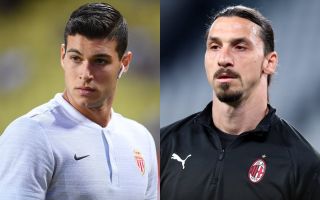 GdS: Pellegri will get to play with his idol Ibrahimovic as Milan move is close

Pietro Pellegri is just details away from joining AC Milan as the latter have reached an agreement with Monaco for his transfer. For the youngster, it’s a big opportunity and he will finally get to play with his idol.

Earlier today, Calciomercato.com reported that Milan and Monaco have reached an agreement on the basis of a €1m loan with an option to buy at €7-8m. It could turn into an obligation if certain conditions are met this season.

The report also added that Pellegri could undergo his medical already tomorrow, or at the latest on Monday. And for the young striker, it’s a great opportunity to prove his worth and he will also be the deputy for his idol: Zlatan Ibrahimovic.

This was reported by today’s edition of Gazzetta Dello Sport (via MilanNews), stating that the former Genoa man has always had Ibrahimovic as his idol. They share similar characteristics and that is a big part of it.