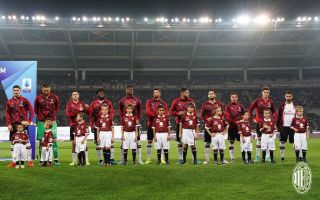 GdS: Pioli chooses his five untouchables for Serie A resumption

The resumption of the Coppa Italia and Serie A is slowly approaching and AC Milan are preparing at Milanello for their return to the pitch. In the process, coach Stefano Pioli has identified the players he will rely on in this ‘new beginning’.

Besides the absolute guarantees in Gianluigi Donnarumma and Theo Hernandez, there ar five ‘untouchables’ for Stefano Pioli in the Milan squad. According to Gazzetta dello Sport (via milanlive.it), these are Alessio Romagnoli, Ismael Bennacer, Franck Kessie, Hakan Calhanoglu and Ante Rebic.

Given that these players will stay injury-free and will not be suspended, Stefano Pioli wants to fully rely on them and field them in all of the remaining 13 matches (or 14 in the event of the Coppa Italia final) between now and August.

Every player has gained his status for different reasons. Romagnoli is considered an irreplaceable leader of the team, while Bennacer and Kessie have no real competition in the midfield. Bonaventura and Paqueta will compete for the last spot alongside the two, while Calhanoglu has finally expressed himself at a high level under Pioli.

In the attack, waiting for Ibrahimovic, the guarantee remains precisely Rebic. Pioli hopes that the Croatian has not lost his glaze and goals scent due to the forced break, because he will now have to be the point of reference of the offensive department.