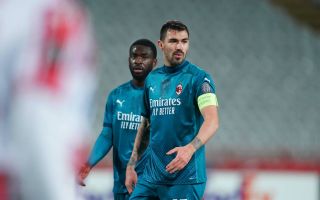 GdS: Pioli has full confidence in Romagnoli – he will start against Red Star and Roma

AC Milan boss Stefano Pioli has full faith in captain Alessio Romagnoli despite the criticism he continues to receive, a report claims.

Yesterday in his pre-match press conference Pioli defended the centre-back amid the recent criticism that he has received from sections of the media and Milan’s fan base.

According to this morning’s edition of La Gazzetta dello Sport (via MilanNews), Pioli will start the defender both tonight against Red Star and also on Sunday in the capital against Roma, highlighting the confidence that the coach has in the defender.

Alongside Romagnoli tonight will not be Kjaer but Fikayo Tomori, so therefore the “change” for the captain called for loudly on social media in recent days.