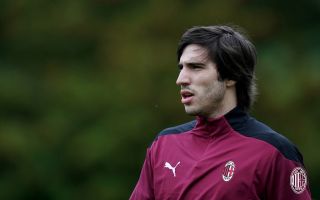 GdS: Pioli not thinking about starting Tonali against Bodo/Glimt – his fitness must improve

AC Milan head coach Stefano Pioli will resist the temptation to give Sandro Tonali his first start for the club on Thursday night, a report claims.

The Rossoneri face Bodo/Glimt at San Siro in what could be a tricky Europa League third qualifying round game, as the Norwegian side are flying high and play an attractive style of football.

According to a report from La Gazzetta dello Sport (via MilanNews), head coach Stefano Pioli is not currently thinking of handing Tonali his first start.

In order for him to become a starter, it will be necessary to wait a little longer as the Italy international has only been working at Milanello for a few weeks and must first think about improving his physical condition.

As a result, it seems the Kessie-Bennacer duo are in line to get the nod again.