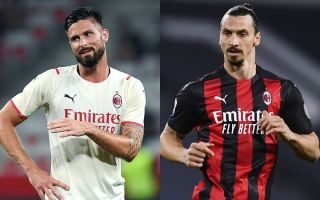 Olivier Giroud tested negative for Covid-19 yesterday and will soon be back at Stefano Pioli’s disposal. And with Zlatan Ibrahimovic back in training as well, the two strikers could play together.

As reported by today’s edition of Gazzetta Dello Sport (via MilanNews), Giroud most likely won’t be on the bench tomorrow. He will undergo several tests today, in line with the Covid-19 protocol, so he won’t feature in the training session.

For the games against Liverpool and Juventus, though, he will be ready and Pioli could decide to start him and Ibrahimovic together. In pre-season, he tested a 4-4-2 against Panathinaikos and it went well, although it would be a gamble.

Giroud and Ibrahimovic are two similar players and this could make things difficult in a 4-4-2. However, Pioli will have to try it before making a verdict on the matter and it would certainly be interesting to see it.

READ MORE: Curva Sud have decided to not boo Kessie despite renewal saga