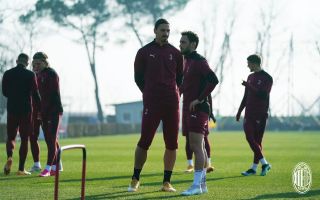 GdS: Pioli relishing two weeks to improve the physical condition of his squad – the plan

Having started the season in the Europa League preliminaries, Milan are the Italian team that has played the most games so far this season, so depth is and will be incredibly important.

As La Gazzetta dello Sport writes (via MilanNews), Stefano Pioli actually highlighted the importance of the next 14 days and having only league games after the win over Bologna: “After this commitment we will have two clean weeks at our disposal.”

These two weeks will be used by the Rossoneri to put fuel in the players’ legs to better face the last few months of the season. The Rossoneri expect to be involved in both a Scudetto charge and a run deep into the Europa League.

Pioli wants to have all his players at top condition, including the newcomers like Mario Mandzukic – who is the one who seems to need the most work – and that is why training over the next days will be quite tough from a physical point of view, then as we get closer to the match against Crotone the workloads will lower.

Playing every three days and with a very short Christmas break, it is the first time that at Milanello there has been the possibility to train continuously and also do some physical preparation. These sessions will be particularly useful for the new arrivals to get up to speed, the paper adds.