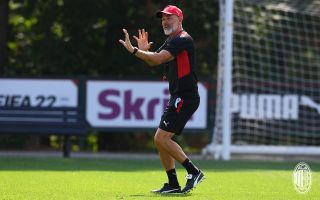 Head coach Stefano Pioli is studying a couple of formations that AC Milan could change into during the course of a game, according to a report.

This morning’s edition of La Gazzetta dello Sport (via MilanNews) writes that Pioli and Milan want to continue to be unpredictable and that is why he is working on a team that knows how to change during the game.

He even confirmed as much himself during his interview at the start of preseason: “Ours will be a fluid game system, which can vary from game to game. We will try different situations, different positions, we want to be unpredictable.”

Maignan, Kjaer, Rebic and Giroud will also start working in Milanello on Monday, so then Pioli will have almost the entire squad available and will be able to experiment with new solutions. The 4-2-3-1 remains the main formation, and of course the characteristics of the new attacking midfielder must be seen too.

There is the possibility of a 4-4-2 being used again if Milan need more presence inside the box, but the two strikers could also have a diamond behind them in a 4-3-1-2 system. Another option would be the 4-3-3, with a three-man midfield and two wingers supporting the centre-forward.