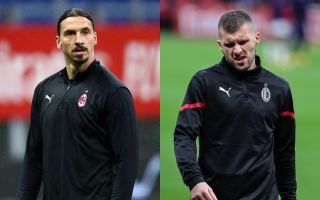 GdS: Pioli will decide between Ibra and Rebic for Lazio clash at the last minute

Zlatan Ibrahimovic has been training with the team for quite some time now but his presence tomorrow is far from certain, at least not from start. Ante Rebic is ahead but that could seemingly change soon.

According to Gazzetta Dello Sport, as cited by MilanNews, Stefano Pioli is yet to decide who will play from start up front. Rebic has been the favourite in all of the probable XIs thus far, but Ibrahimovic still has a chance.

Pioli is expected to decide the matter at the last minute, as per the newspaper, with the battle currently at 55-45% in favour of Rebic. Although it would be nice to see Ibrahimovic back from start, it might not be worth the risk.

After all, Milan will take on Liverpool just a few days later and the Swede’s presence could be crucial for that game. Then again, it will be up to Pioli to make the right decision.

READ MORE – Ibrahimovic admits he has changed but assures: “I do my best to help the team”