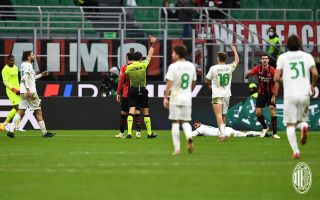 A number of AC Milan players are deserving of criticism for their performance against Sassuolo as is reflected in La Gazzetta dello Sport’s player ratings.

The paper (via MilanLive) have only spared a couple of players, the first being Simon Kjaer who got a 6 for being the only man in the rearguard to show any kind of competency. Substitute Junior Messias got the same mark as he tried to make something happen and was the only one to have a shot on target in the second half.

A 5.5 was given to the unfortunate Mike Maignan who conceded goals to Scamacca, Berardi and a deflection off Kjaer. Alexis Saelemaekers got the same because he fought and ran but did nothing in the final third – as is becoming a theme – while substitute Sandro Tonali also received 5.5.

A 5 went to captain Alessio Romagnoli who gave his side the lead with a nice header, but then was humiliated by Berardi for the third goal and was sent off. Ismael Bennacer got a 5 too for a ‘confused’ performance.

Alessio Florenzi and an ‘unrecognisable’ Theo Hernandez got a 4.5 as did midfielder Tiemoue Bakayoko as all of the trio looked lost. It was the same score for Brahim Diaz, Rafael Leao and Zlatan Ibrahimovic as the three forwards offered nothing in terms of end product despite starting brightly.

The worst on the field was Franck Kessie as per the paper with the Ivorian getting a 4 in the ratings. He took over from Bakayoko and managed to do worse, by giving the ball away for the 3-1 goal.