AC Milan boss Stefano Pioli will welcome back a key player to his starting XI for the visit of Napoli on Sunday, at least according to La Gazzetta dello Sport.

Theo Hernandez, Ismael Bennacer, Hakan Calhanoglu, Ante Rebic, Zlatan Ibrahimovic and Mario Mandzukic were not available for the game against Manchester United, while Alessio Romagnoli had a foot problem and also missed out.

La Gazzetta dello Sport has predicted the line-up Pioli will field on Sunday, with Gianluigi Donnarumma set to have a back four of Davide Calabria, Simon Kjaer, Fikayo Tomori and Theo in front of him.

The midfield pairing should be Franck Kessie and Soualiho Meite, again even though Sandro Tonali has fully recovered, which is an interesting choice but Meite did well in Manchester. Alexis Saelemaekers, Calhanoglu and Samu Castillejo should act in the attacking trident behind centre-forward Rafael Leao. 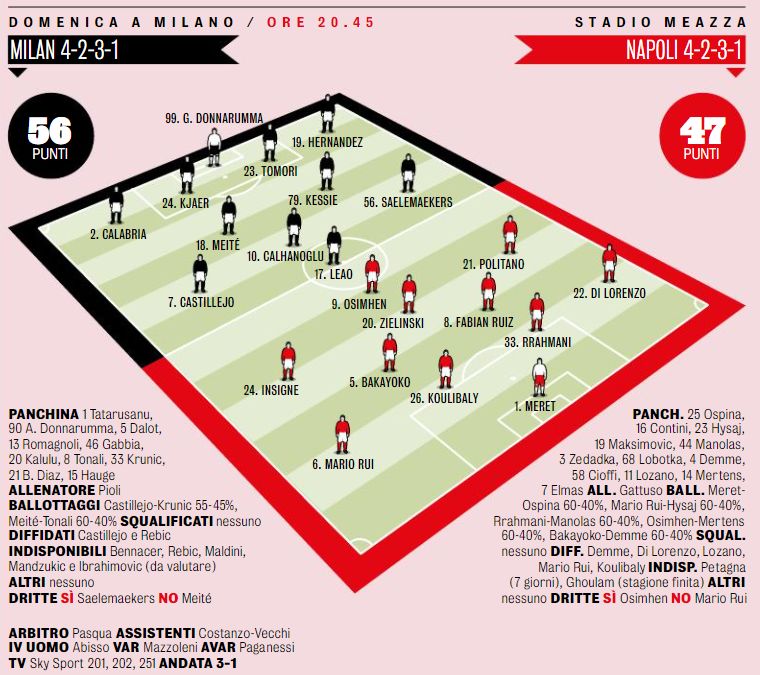 Tags AC Milan Milan Napoli
Related Articles
Di Canio says Milan striker is ‘not a goalscorer’ but can be ‘very important’
10 August 2022, 20:43
CorSport: Sampdoria must offload Murillo before moving for Milan defender
10 August 2022, 20:20
Di Marzio: Another meeting will be needed with Milan to extend Tomori contract
10 August 2022, 19:00
Serie A Standings