Following the 4-2 win against Celtic, Milan are now gearing up to take on Sampdoria away from home. With five points to spare at the top, the Rossoneri will be looking to extend their lead even more.

Stefano Pioli will have to do without Simon Kjaer, Zlatan Ibrahimovic and Rafael Leao, which certainly is a blow. That being said, the squad has enough depth to cover for the trio, although they wouldn’t want to get any other injuries.

As reported by Gazzetta Dello Sport (see photo below), the manager is expected to make four changes from the Celtic clash. At the back, Alessio Romagnoli will slot in alongside Matteo Gabbia to cover for the Dane, while David Calabria is back on the right.

Ismael Bennacer will be back from start after getting some rest last time out, while Alexis Saelemaekers will replace Samu Castillejo on the right flank. The interesting battle is between JP Hauge and Brahim Diaz, with the former currently ahead. 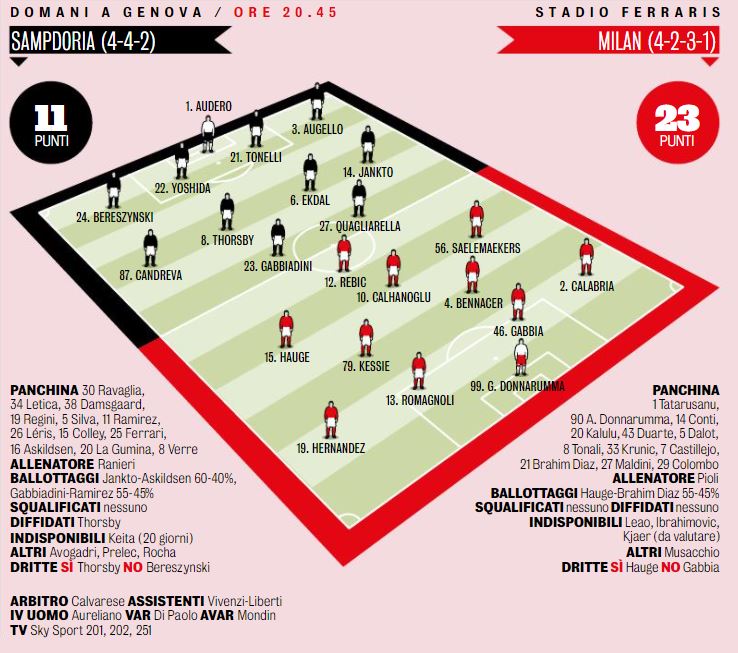 READ MORE – Calabria opens up about ‘tough’ season with Milan: “I had to roll up my sleeves”