Alessio Romagnoli is set to keep his place in the starting line-up for Sunday’s game against Hellas Verona, according to a report.

Milan boss Stefano Pioli will be without Zlatan Ibrahimovic and Hakan Calhanoglu for the trip to the MarcAntonio Bentegodi, while Ismael Bennacer and Mario Mandzukic will also miss out as they continue to recover from muscle injuries.

La Gazzetta dello Sport reports that a back four of Davide Calabria (back in for Pierre Kalulu), Simon Kjaer, Alessio Romagnoli and Theo Hernandez will be in front of Gianluigi Donnarumma, with Tomori on the bench.

Sandro Tonali and Franck Kessie will be the double pivot, with Samu Castillejo, Rade Krunic and Rafael Leao acting behind the centre-forward Ante Rebic in what represents a switch of position between the Portuguese and the Croatian. 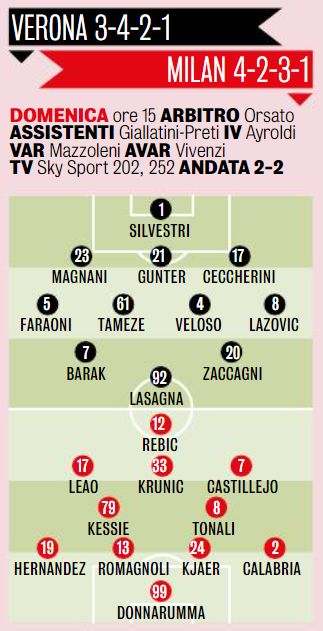