AC Milan will be looking to take back the top spot in Group H with a win over Lille in the Europa League on Thursday night.

The Rossoneri will be missing some important players such as Zlatan Ibrahimovic, Rafael Leao and Alexis Saelemaekers, which has forced Stefano Pioli to make a few selection decisions in view of the game.

It is no surprise to see that La Gazzetta dello Sport believe Milan will use a 4-2-3-1 system, with two changes in defence as Diogo Dalot comes in on the right and Matteo Gabbia will partner Kjaer given that Romagnoli’s recovery is being managed. Theo Hernandez will be on the left, with Gianluigi Donnarumma in goal.

In midfield, Franck Kessie should get a rest with Sandro Tonali ready to join Ismael Bennacer, while in the attacking trident behind Ante Rebic it will be Hakan Calhanoglu at playmaker, with Samu Castillejo on the right and Jens Petter Hauge on the left. 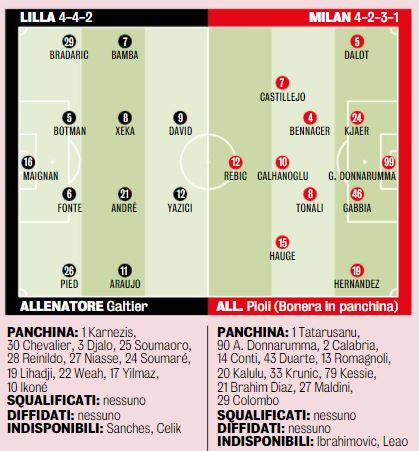