GdS: Probable XIs for Cagliari vs. Milan – Ibrahimovic to start; Hauge over Diaz

Following the win against Torino after penalties, with Milan converting all of theirs in style, they are now preparing to take on Cagliari away from home. It will be an important game, as they could be crowned winter champions.

Stefano Pioli is still battling with a few absences as the likes of Matteo Gabbia, Ismael Bennacer, Rade Krunic, Alexis Saelemaekers, Ante Rebic and Rafael Leao are set to miss out. In other words, the emergency is far from over.

Therefore, as reported by Gazzetta Dello Sport (see photo below), the manager doesn’t have many options with regards to the starting XI. The defence remains strong, with the usual back-four set to start the game.

As Leao is suspended, Zlatan Ibrahimovic will play from the first minute and it remains to be seen if he can play the entire game. Having just recovered from an injury, Pioli might have to replace him with Lorenzo Colombo in the second half. 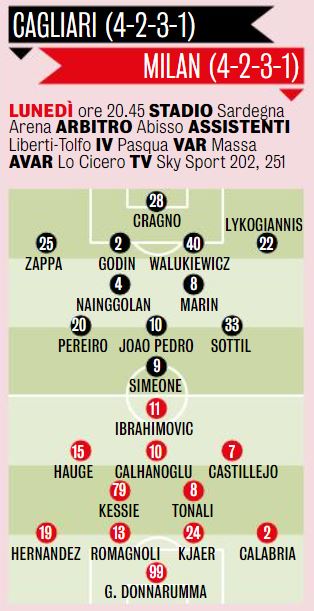 Tags AC Milan Cagliari Stefano Pioli
Related Articles
MN: Hernandez continues individual training ahead of Chelsea and Juve clashes
2 October 2022, 14:48
Ambrosini on Empoli-Milan: “Perhaps we will remember this at the end of the season”
2 October 2022, 14:30
Injury-time goals and Leao success: All the key stats from Milan’s win against Empoli
2 October 2022, 14:00
Serie A Standings