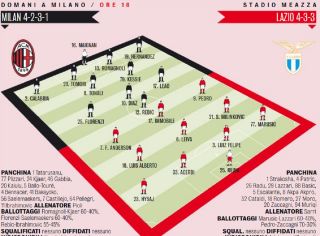 The international break has (finally) ended and AC Milan will take on Lazio in the third round of Serie A tomorrow. With two wins in the bag, they will be looking to continue on the same path.

According to today’s edition of Gazzetta Dello Sport (see photo below), Stefano Pioli is expected to make four changes to the starting XI – one for each department. In defence, Alessio Romagnoli could start ahead of Simon Kjaer, who is tired from international duty.

Further up the pitch, Franck Kessie is back as he will partner up with Sandro Tonali in the midfield tandem. Then, in the attacking trio, Alessandro Florenzi is ahead of Alexis Saelemaekers as the latter also played a lot during the break.

Finally, Ante Rebic is the favourite to start up front although Zlatan Ibrahimovic wants to make his return straight away. Olivier Giroud has tested negative but he might not be called up for the game still.

READ MORE: Milan smile as Kessie and Tonali will partner up – exactly what Pioli wants