AC Milan head coach Stefano Pioli will be forced into several choices regarding his starting line-up to face Porto tonight, a report claims.

La Gazzetta dello Sport reports that Ciprian Tatarusanu will be in goal therefore, protected by a back four consisting of Pierre Kalulu on the right, Simon Kjaer and Fikayo Tomori as the centre-backs and Davide Calabria playing at left-back.

Ismael Bennacer and Sandro Tonali will start in the midfield with Kessie suspended while Alexis Saelemaekers, Rade Krunic and Rafael Leao play behind the centre-forward Olivier Giroud again. Zlatan Ibrahimovic will start from the bench, while Tiemoue Bakayoko returns.

Porto boss Sergio Conceicao will also use a 4-2-3-1 with Diogo Costa having a back four of Joao Mario, Pepe, Mbemba and Wendell ahead of him. Uribe and Sergio Oliveira should be in the midfield with Otavio, Corona and Luis Diaz acting in the trident behind Taremi. 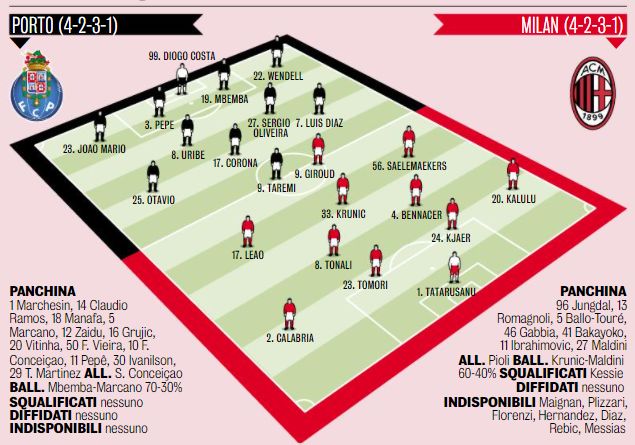