GdS: Probable XIs for Milan vs. Juventus – Romagnoli and Tonali return for the Rossoneri

According to what is being reported by La Gazzetta dello Sport, Mike Maignan will be the goalkeeper for the Rossoneri with Alessandro Florenzi keeping his spot at right-back as Davide Calabria has spent a few months out and is not quite at 100%. Pierre Kalulu retains his place at centre-back with Alessio Romagnoli returning after Covid, and Theo Hernandez on the left.

Sandro Tonali is back from suspension to take up a place in the double pivot again with Tiemoue Bakayoko expected to get the nod as well over Rade Krunic. The attacking midfielder ahead of them will be Brahim Diaz, with the Bosnian therefore relegated to the bench.

Regarding the attack, Alexis Saelemaekers and the in-form Rafael Leao should occupy the wings and Zlatan Ibrahimovic is the man who the paper think will lead the line over Olivier Giroud. 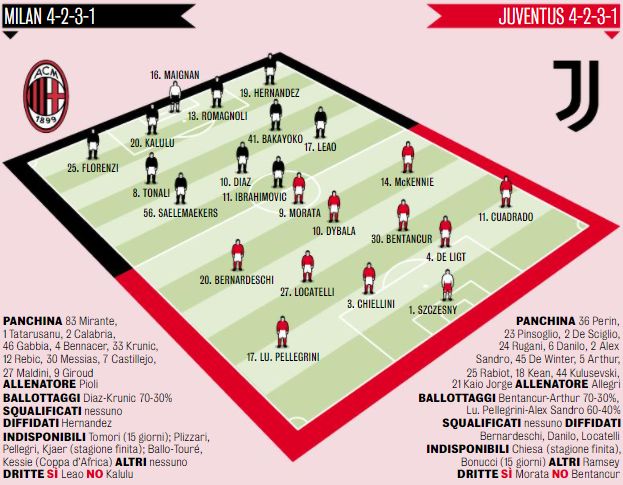 Tags AC Milan Milan-Juventus
Related Articles
MN: The €500m clause that allowed RedBird to beat Investcorp to Milan takeover
20 May 2022, 16:05
Reports: Current Milan management expected to stay under RedBird
20 May 2022, 15:38
Expert explains what it means if Elliott sell Milan to RedBird over Investcorp
20 May 2022, 15:09
Serie A Standings