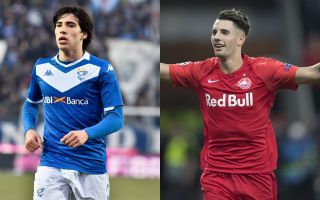 AC Milan are hard at work to launch a new era under Ralf Rangnick ahead of next season, according to a report.

According to Thursday’s edition of La Gazzetta dello Sport (via MilanNews) reports that Milan – with the suggestions of Ralf Rangnick – are moving to prepare for next season.

Among the market objectives is Sandro Tonali, for whom Inter remain ahead in the race but have not yet made an official offer, something CEO Ivan Gazidis wishes to take advantage of. His price tag is €30m.

Dominik Szoboszlai of Red Bull Salzburg is another midfield target, and he continues to shower social media with hints about a possible move. Rangnick is his mentor, and the negotiations could really take off soon as he has a €25m release clause.

The Rossoner are hoping to convince Roma with an offer of €20m plus bonuses, while Milan are leading the race for Rashica who would also cost around €20m despite his €38m release clause.