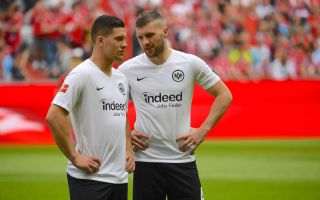 GdS: Real Madrid striker on loan is the latest idea for Milan as plan B

Milan are still looking for a striker on the market after failing to reach an agreement with Chelsea over Olivier Giroud, thus far. Some new (and old) names have emerged and the latest idea is Luka Jovic.

Jovic has been linked with the Rossoneri in the past but a move has never materialised. According to Gazzetta Dello Sport (via MilanNews), the Serbian is an option for Milan as an alternative to Olivier Giroud, should the Frenchman remain in England.

While waiting for the Chelsea striker, Paolo Maldini and Ricky Massara have started to explore other options and Jovic is one of them. The idea would be to sign him on loan from Real Madrid, meaning it would be a low-cost operation.

The Bernabeu side are open to a loan either with or without an option to buy, which could make Jovic a good option for Milan. The first choice, however, remains Giroud.