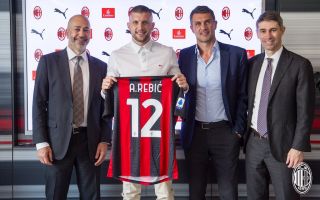 There is still mystery surrounding the amount that AC Milan have paid to Eintracht Frankfurt for Ante Rebic, a report claims.

A statement on the club’s website confirmed that the Rossoneri have indeed converted Rebic’s two-year loan spell (of which he was entering his final year) into a permanent stay at San Siro.

According to Sunday’s edition of La Gazzetta dello Sport (via MilanLive), there is some mystery about the figures of the whole deal, which will see him remain at the club until June 2025.

Milan and Eintracht have chosen not to publish the economic details and this makes it quite intriguing. The German media are reporting that Andre Silva was sold by Milan to Eintracht for about €9million, which would constitute a loss on the balance sheet but would apparently facilitate Rebic’s arrival at almost no cost.

Another theory speaks of two €9m operations, therefore a straight swap. It is likely that Milan will keep these figures top secret also for the clause in favour of Fiorentina, who have a 50% resale clause on the Croatia international.