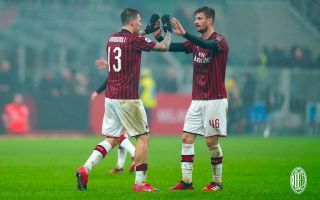 GdS: Renewal on the cards for Romagnoli – Milan keen on partnership with Gabbia

AC Milan are ready to build their team around Alessio Romagnoli, having no intention of parting ways with their captain in the future. Therefore, they are working to present a contract renewal to the former Roma man.

A stated in today’s edition of Gazzetta Dello Sport (via MilanNews.it), the defender’s contract will expire in the summer of 2022, but Milan are keen on dealing with the matter as soon as possible to avoid another Gigio Donnarumma situation.

In fact, the Rossoneri will soon present a contract renewal to Romagnoli, who has been an important player for the club in the last few years. Alessio, therefore, is destined to remain at Milanello.

The only thing left is to find him a suitable defensive partner, and Milan are hoping that Matteo Gabbia can be the right man. The youngster, who recently renewed his contract until 2024, as amazed everyone for his personality.

Initially, Milan thought another loan spell was needed, but Gabbia has proven to have quality and character to support the weight of the shirt. In other words, he could be the next big name in the backline.