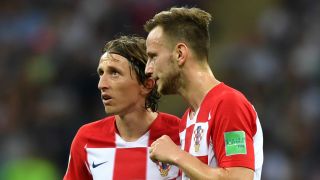 AC Milan are not in the race to sign midfielder Ivan Rakitic, a report claims, despite speculation in the media suggesting otherwise.

Spanish outlet Mundo Deportivo reported on Saturday Milan are planning another attempt at signing the Croatian international, who is destined to leave Barcelona at the end of the season. In fact, he is apparently considered the ideal candidate for the club.

According to what La Gazzetta dello Sport reporter Nicolo Schira has posted on Twitter though, the Rossoneri are in fact not in the running to land Rakitic this summer.

He claims that owners Elliott Management are not interested in the prospect of signing the former Sevilla star as his wage demands will be too excessive for their project.

It is widely reported that the 32-year-old currently has a salary of €8million per year net, which would of course be well above the salary cap that CEO Ivan Gazidis apparently has in mind.

#ACMilan are not in talks with #Barcelona for Ivan #Rakitic. The croatian midfielder is not a target for #Elliott's project, because his wages are too high. #transfers #FCB