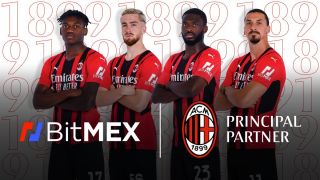 GdS: The amount Milan receive from BitMEX as the Official Sleeve Partner

The amount that AC Milan will receive from BitMEX for the sponsorship of the shirt sleeves has reportedly been revealed.

Milan announced back in August that they have reached a deal with BitMEX to become the club’s first ever Official Sleeve Partner. The news was confirmed via the club’s official website and marks the start of sponsorship from one of the world’s leading crypto derivatives platforms.

It is a multi-year partnership that will also see BitMEX become the first-ever Official Cryptocurrency Trading Partner of the Rossoneri. They currently feature on the sleeve of both the men’s and women’s team playing kit in all competitions.

According to the latest from La Gazzetta dello Sport (via Francesco Nasato), Milan will earn around €5m per year from the sponsorship deal they have signed with BitMEX. The €10m per year plus bonuses from Emirates as the main sponsor must be added to this amount as well for the overall revenue generated from shirt sponsorship.