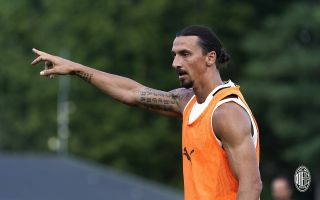 GdS: The wait is over for Ibrahimovic as he targets crucial fixture for his return

AC Milan are gearing up for the return of Zlatan Ibrahimovic, and a report has claimed he will be back in time for the resumption of Serie A next week.

This morning’s edition of La Gazzetta dello Sport (via MilanNews) writes that the Swede has now fully recovered as the images from yesterday at Milanello showed, with the striker even putting on his Instagram: “Guess who’s back.”

The Rossoneri have their leader back, and Zlatan has targeted the Lazio game on Sunday 12 September as the date for his return, with the 39-year-old keen to take advantage of the international break to get back to a good condition. Ibrahimovic will have to be managed with care as a new injury would be a huge blow, especially with such a challenging schedule this season.

Stefano Pioli is also expected to use the current break to be able to experiment tactically, as the idea of partnering Ibrahimovic with a striker like Giroud is certainly tempting, though it is not yet known if it is a dynamic that would work.

READ MORE: Milan to resume discussions with Kessie – the three ways to reach an agreement