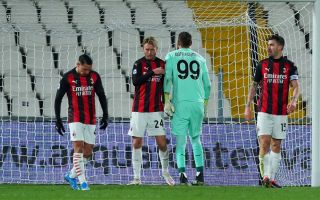 GdS: Total blackout for Milan that worries as certainty has gone missing

Milan suffered a bad defeat away at Spezia last night, not just based on the scoreline, but also how they played throughout the game. The home side were dominant and deservedly came away with all three points.

As Gazzetta Dello Sport highlights (via MilanNews), it’s a real nightmare and a blackout that worries. Inter will have the opportunity to leapfrog Milan this evening as they take on an in-form Lazio side, hoping to clinch first place ahead of the derby.

The Rossoneri would have themselves to blame if this happens, making the upcoming week a lot more complicated than it could have been. First, they will take on Red Star Belgrade in Europa League, and then Inter at the weekend.

Pioli’s team was simply unrecognisable and that is indeed worrying, clearly in a worse physical condition than their opponents and also less concentrated. Ibra and his teammates seem to have lost the certainty they have enjoyed this season.

READ MORE: The way Milan lost vs. Spezia is unacceptable – alarm goes off at Milanello