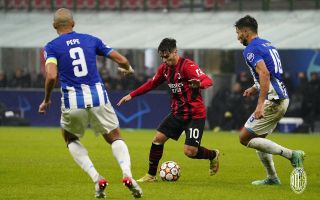 AC Milan’s failure to show their true selves last night against Porto and to end up with just a point can be attributed to two factors, a report has claimed.

La Gazzetta dello Sport (via MilanNews) have analysed Milan’s performance against Porto, a game that they virtually had to win in order to keep alive their slim hopes of reaching the last 16 of the Champions League, but were forced to settle for a 1-1 draw in.

The paper writes that too many key players disappointed on the night such as wingers Rafael Leao and Alexis Saelemaekers, full-back Davide Calabria and midfielder Ismael Bennacer. Only Sandro Tonali played an excellent game and helped to wrestle back some control after a terrible first half.

There are a couple of things to point to that might explain the abject display though, the first being fatigue as Leao is tired and Brahim Diaz not yet at his top condition after Covid, for example. Then the second is the experience that a young team like the Rossoneri lacks.