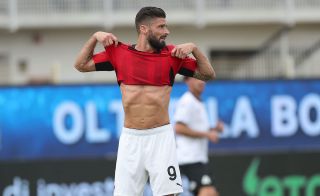 Stefano Pioli is hoping to have the real Olivier Giroud back as soon as possible after a disrupted last couple of weeks, a report claims.

Giroud came onto the field in the second half in place of Rafael Leao during Tuesday night’s defeat against Atletico Madrid but he did not look himself in truth, playing without the usual intensity and failing to occupy the final third like he is known to.

As reported this morning by La Gazzetta dello Sport (via MilanNews), the Frenchman is clearly not at his best condition as Covid and then back pain forced him to skip several training sessions, which are setbacks that disrupted the momentum he had built.

At the moment he is not ready to be a starter and so on Sunday against Atalanta he will start on the bench with Ante Rebic the man up front. Giroud will be an option for Pioli to bring on and he will hope for a more influential contribution, while the international break follows and Giroud will use every day to get back to his peak.

READ MORE: Only uncertainties are in defence and midfield for Pioli ahead of Atalanta game