One of the biggest benefits of AC Milan’s remarkable run of form post-lockdown is the effect it has had on the valuation of the squad, a report claims.

Milan extended their unbeaten league run to 21 games with a 2-0 win over Fiorentina on Sunday, which also extended their lead atop the Serie A table to five points.

Looking at the top five European leagues – Italy, France, Spain, Germany and England – no other team has the points average this season that the Rossoneri do apart from Atletico Madrid as this team continues to break records.

La Gazzetta dello Sport have run a feature today on the value of Milan’s squad with the headline: “Milan-boom in three months: worth 100 million more. Theo example of growth.”

The paper notes how at the start of the season the team were worth €360m combined but now they are worth €475m – an increase of €115m for those who aren’t mathematicians among us.

They pick out five players who have grown: Theo Hernandez’s value has doubled from €20m to €40m, Davide Calabria has gone from nothing (as he is an academy graduate) to €20m, and Franck Kessie for €28m to €40m.

In addition, Alexis Saelemaekers has gone from a €7m signing to being worth €20m and finally Rafael Leao has risen by €12m from €28m to €40m. 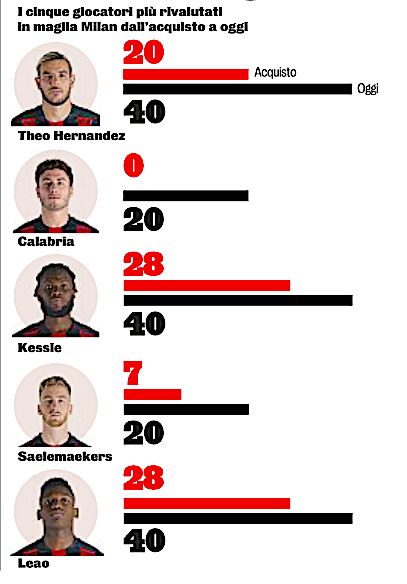