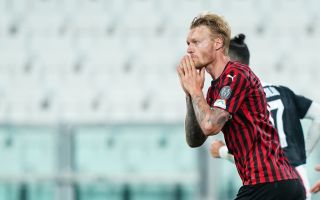 GdS: Why Milan didn’t get a penalty when Kjaer was pushed – what VAR told Orsato

Due to the away goal Cristiano Ronaldo scored at San Siro months ago, a 0-0 draw wasn’t enough for AC Milan against Juventus last night. The Rossoneri tried their best but lacked quality and composure up front.

They didn’t have many chances throughout the game, not helped by Ante Rebic’s sending off early in the first half. Although just two shots were on target, a few opportunities could have resulted in a goal with a bit more composure.

In the 42nd minute, on a free-kick from Hakan Calhanoglu, Simon Kjaer was brought down in the area by Leonardo Bonucci. Milan immediately got the referee’s attention, urging him to make use of VAR after the Conti handball earlier.

🤔 Was this a penalty for a push on Kjaer?

However, Daniele Orsato never made an on-field review. According to Gazzetta Dello Sport, as cited by Milanlive.it, a silent check was enough to determine that Kjaer was in an offside position when the free-kick was hit.