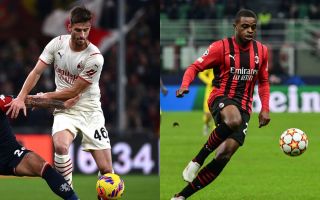 GdS: Probable XIs for Milan vs. Roma – Gabbia and Kalulu to start in defence

AC Milan will face Roma at the San Siro tonight and it won’t be an easy game for the Rossoneri, who have a total of 11 players absent. This also means that there will be some changes to the starting XI.

As reported by Gazzetta Dello Sport (see photo), it will be Matteo Gabbia and Pierre Kalulu in the heart of the defence. A centre-back pairing that is very young and which has never been used in a game before. Of course, it’s the result of Fikayo Tomori and Alessio Romagnoli testing positive.

In midfield, Rade Krunic is ahead of Tiemoue Bakayoko for the starting spot alongside Sandro Tonali. Ismael Bennacer and Franck Kessie are on international duty and thus, much like the defence, the midfield is decimated to the bare bones.

Up front, Olivier Giroud looks set to start rather than Zlatan Ibrahimovic, who has recovered from the problem which kept him out against Empoli. In short, it will be a very interesting game.

📰 The probable starting XIs for #MilanRoma, according to @Gazzetta_it.