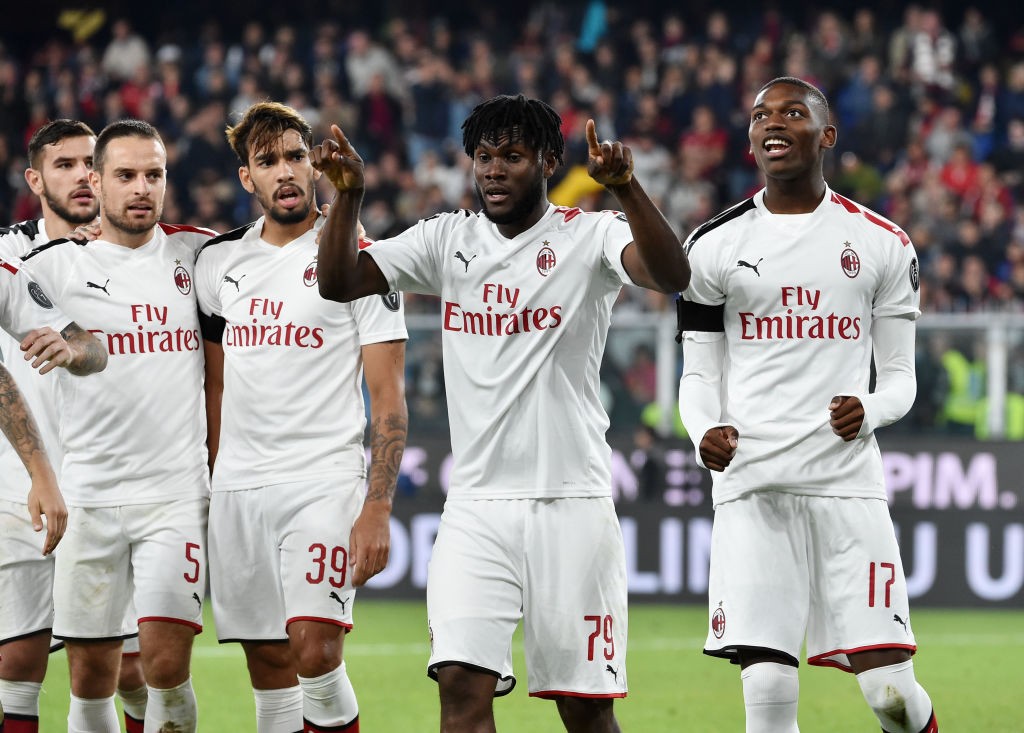 Genoa 1-2 Milan: Rossoneri prevail in dramatic encounter at the Marassi

AC Milan recorded their third win of the season as they prevailed 2-1 against Genoa in a dramatic encounter at the Stadio Luigi Ferraris.

Genoa took the lead in the first half as Lasse Schone beat Pepe Reina – who replaced the injured Gianluigi Donnarumma -with a low free-kick that the veteran should have saved.

The Rossoneri were buoyed by a double change at half time as Lucas Paqueta and Rafael Leao came on, though it was Theo Hernandez who levelled with a fine strike from a narrow angle.

Franck Kessie tucked away a penalty after Leao drew a hand ball and a red card shortly after, but there was drama in the final few stages as Reina saved a Schone penalty in added time to earn revenge after a harsh penalty call.

There was a change in plans for Marco Giampaolo during the warm up as Donnarumma pulled up injured and Reina was forced to replace him in the starting XI.

The home side got on top in the early stages, and Lukas Lerager found space inside the box less than ten minutes in, drawing a save from Reina low down after his shot had beaten a defender.

Former Milan man Cristian Zapata was the first into the book as he brought down Theo Hernandez after he had intercepted a pass.

The Rossoneri got more and more into the game, and Ionut Radu was forced to make a save from a Suso free-kick, and he watched moments later as the Spaniard curled a shot narrowly over from the right flank.

Giampaolo’s side were not lacking in intensity, and after winning the ball back in midfield ten minutes before the break Franck Kessie decided to launch a fierce low shot into the side netting.

Not long before the break Marko Pajac forced Reina into a save as he danced past Davide Calabria before seeing his attempt palmed away at the near post.

Not long after Genoa did take the lead as Reina made an appalling error. Schone laced a free kick from 30 yards on target but as the Spaniard went down to collect, he spilled the ball into the back of the net to give the home side the lead.

The Rossoblu could have doubled their advantage moments before the break as a short corner found Pajac, who crossed for an unmarked Sergio Romero who headed over.

Riccardo Saponara was sent off from the Genoa bench shortly after the chance for his protests from the bench.

Giampaolo was forced into a double change at half-time as a result but didn’t hold back, bringing on Lucas Paqueta and Rafael Leao in place of Hakan Calhanoglu and Krzysztof Piatek respectively.

Milan pressed from the beginning of the second half and came close to levelling instantly when Giacomo Bonaventura’s low ball almost found the onrushing Rafael Leao.

The visiting side also had a clear penalty turned down moments later as Calabria’s floated cross landed on the arm of Pinamonti, though the referee didn’t even choose to look at the VAR screen.

However seconds later Milan would draw level as a quickly taken free-kick found Hernandez down the left, and the full-back smashed home at the near post past Radu.

Moments later the most controversial incident of the game as Biraschi was – after a VAR check – adjudged to have handled the ball inside the area following Rafael Leao’s sharp turn.

Not only was the penalty given, but the defender was sent off, and Franck Kessie slotted home the penalty to give Milan a 57th minute lead.

Lucas Biglia went into the book for a foul before Lerager saw yellow for the home side for a challenge on Paqueta.

Despite being knocked back, the Rossoblu continued to push for a quick leveller, and substitute Favilli almost found Christian Kouame unmarked at the far post to level.

Kouame then drew a red card from Calabria, as the Milan right-back pulled him down as he tried to run in behind, causing the refereee to rightly brandish a second yellow card.

Romero wasn’t far from equalising moments later as his acrobatic overhead kick inside the area was straight at Reina, and Andrea Conti came on for Bonaventura while he was receiving treatment.

There was to be one final twist in the last few moments of the game as Kouame went down under the challenge of Reina, and upon VAR review the penalty was upheld.

However, Reina guessed the right way from Schone’s poor spot kick to keep the score 2-1 in favour of the Rossoneri.

There was yet another red card to follow, as unused substitute Samu Castillejo was sent off on the sidelines for his reaction to the missed penalty.