AC Milan plays Alessandria in a less than a week in the Coppa Italia semi-final so it seems fitting to do a piece on Rivera. A player who played for both sides and is arguably Italy’s greatest ever player.

In 1943, a boy was born in Alessandria named Giovanni Rivera and he would go on to become one of Italy and Milan’s greatest ever footballers. Rivera came through the youth set-up at Alessandria and made his debut in Serie A against Inter at the young age of 15 for his boyhood club and went on to make 20 appearances for the them. The following summer Milan went and made the young starlet of Italian football theirs by spending €200,000 which at the time was a record transfer fee. Rivera was introduced into the Milan side immediately and handed the number 10 jersey for his new club. It took just 2 seasons with the Rossoneri before he won his first Scudetto at the age of 18. The title-winning year he was called up to the Italian national team for the first time and became part of the world cup squad in 1962 debuting for the national team against Western Germany. The following season at the age of 19 the golden boy went on to win the European Cup under famous Milan manager Nereo Rocco for his and the clubs first time. The match ended in a 2-1 victory for the Rossoneri with Jose Altafini scoring both goals against Portuguese outfit Benfica. Gianni Rivera the architect in that match setting up both of the Brazillian’s goals.

Italy’s golden boy was one of the greatest attacking midfielders of his generation and arguably of all time. Although he wasn’t the fastest or strongest player he graced the pitch with elegance and skill and could create an opportunity out of nothing. Even though defensively he wasn’t the best he certainly made up for his with his impressive long range passes and dribbling skills. Rivera wasn’t just known for creating chances he was able to score too. The Italian international is Serie A highest midfield goalscorer with an incredible 128 goals.

Gianni Rivera captained Milan for 12 out of the 19 season’s he was part of the Rossoneri and in his time at the club won 12 club competition’s including 3 Scudetto’s, 2 European Cup’s and 4 Coppa Italia trophies. In 1968, he was part of the Italian side that won its first and only European championship. Rivera never managed to win the world cup but was a runner-up in 1970 a year after winning his second European cup and his only International Cup for Milan. The successful year he had with the Rossoneri brought him the Fifa Ballon d’Or after been a runner-up in 1963. The golden boy of Italian football was the first ever Italian winner of the Ballon d’Or one of the many reasons he has been given the nickname “Italy’s golden boy”. 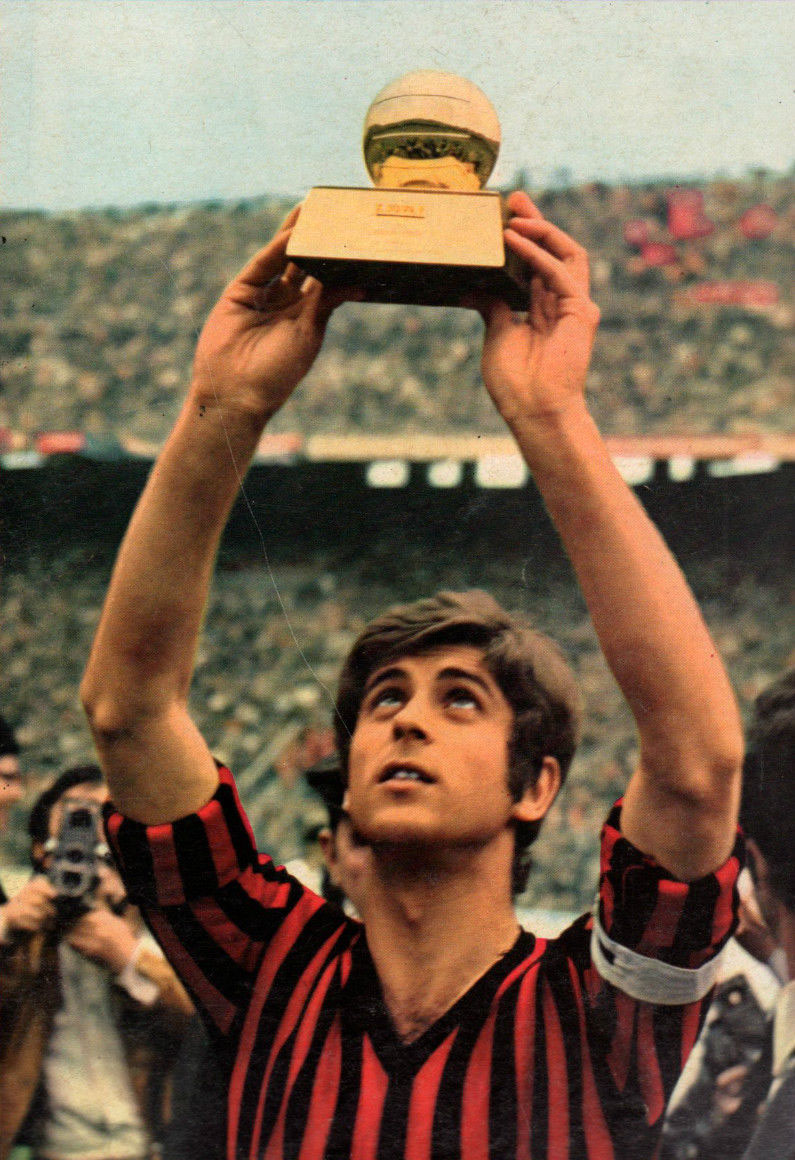 The 1978/79 was his final season with Il Diavolo before retiring from football and he retired on a high winning the Scudetto for the third time and the Rossoneri’s tenth which gave them the star above the badge. Rivera made 501 appearances for the Rossoneri been an ever presences for them throughout his career scoring an incredible 160 goals. Giovanni was also capped 63 times for his nation finding the net 15 times.

After retiring Rivera went on to become Milan vice-president and remained in that position until current president Silvio Berlusconi bought the club when Rivera decided to step down from the role.

With the Coppa Italia semi-final, second leg fast approaching let’s hope both of his former sides can put on a good spectacle for the Italian legend who will no doubt be in the stands watching his boyhood team and the club he became a legend. The Rossoneri will be aiming to make it to the final and hopefully win the competition for the first time in over a decade, a competition that Rivera himself won 4 times at Milan that been the trophy he won the most in his 19 years at the club.