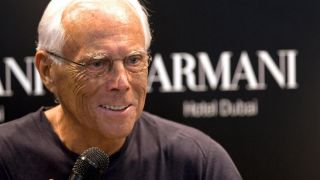 Giorgio Armani hints Arnault is serious about buying Milan; insists he could buy club too

La Repubblica reported on December 27 that Arnault has tabled a €975m bid to buy Milan and is awaiting a response to his offer, while the same outlet then claimed on Monday that talks are ‘at a crucial stage’.

The paper reported that Elliott co-owner Gordon Singer – who was present at San Siro for Milan vs. Sampdoria – was in Milano to discuss the potential takeover with Arnault and the Louis Vuitton group.

Former player and current agent Massimo Brambati then claimed that Arnault is serious about his ideas for the new Milan era and went gone one further by naming the line up at management level that the Frenchman wants.

Now, Giorgio Armani has even commented on the speculation surrounding a potential takeover of the Diavolo by his fellow fashion giant.

“Bernard Arnault wants to be in Milano and if he wants to acquire AC Milan, I could too. It’s my city, I work and breathe here,” he told Corriere della Sera (via MilanNews.it).