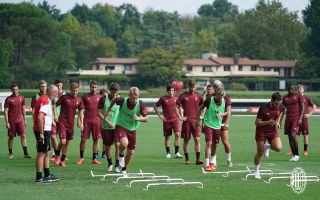 Giornale: Milan face a nightmare stretch after international break – 10 games in one month

AC Milan will face arguably their toughest stretch of the season when the team resume after the upcoming international break.

As il Giornale notes (via MilanLive), Milan will be able to catch their breath after tonight’s game against Hellas Verona as several players will jet off for international duty.

The Rossoneri do need a break to help rest the legs of certain players – at least those not involved for their national teams – but immediately after the resumption of the season there is a very difficult period awaiting.

The paper reports that from 22 November until 23 December, Milan will have to play ten games. Before the Christmas break, Stefano Pioli’s side will basically play a match every three days, between Serie A and the Europa League group stages.

The last week of November is very tough, when Milan will have to challenge Napoli and Lille away from home in a few days and then Fiorentina at San Siro.

Downhill, at least due to difficulty in commitments, the month of December : Sampdoria, Parma, Genoa and Sassuolo appear to be obstacles that are not so insuperable. Provided that the Rossoneri keep pace and ambitions seen so far.