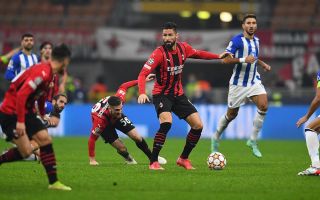 Giroud reveals frustration after draw vs. Porto: “We need to understand what is needed”

Striker Olivier Giroud admitted his frustration as AC Milan were unable to get the three points they so desperately needed against Porto at San Siro tonight.

It was certainly a game of two halves for Milan as they were dominated in terms of chances in the opening 45 minutes, after Luis Diaz’s opener in the early stages had very much set the tone with Sergio Conceicao’s team looking sharper and more dangerous. Pierre Kalulu came on as a substitute and grabbed the equaliser but a winner could not be forced as Milan stay bottom of the group with one point from four games.

Giroud spoke to Sky Italia at the end of the game and summarised his thoughts on the game, which leaves Milan with a virtually impossible task to qualify for the knockout stages. MilanNews relayed his comments.

“I don’t want to talk about the fact that we have a young team, we have the qualities to play the Champions League. Sometimes you just need a little luck,” he said.

“We play good games, like at Anfield and against Atletico before we found ourselves a man down, but we have turned a little badly. We need to understand what is needed in a competition like this. We hope to score more points in the next games, but now we feel a bit frustrated.”

Attention now turns to Sunday’s derby against Inter where Milan will look to get one over on their city rivals and also make it 11 wins out of 12 in the league in the process.

“Yes, I take matches one after the other. Now we are focused on the derby, but before the match against Porto we were focused on today. We play for this type of matches and I can’t wait to play the derby. We need to rest and then we will come back with the same energy and the desire to win this derby.”