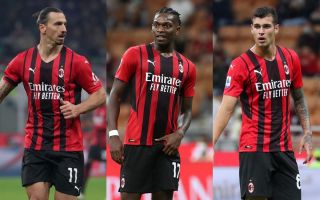 Olivier Giroud sustained an injury in the mid-week clash against Atletico Madrid, forced to leave the pitch in the second half. By the looks of it, he will be out for quite some time and that is bad news for AC Milan.

The French striker, as reported by Calciomercato.com, will require further checks in ten days and the fear is that he could miss the rest of 2021. Should that be the case, he will miss between five and seven games for Milan.

Among these are the clashes against Liverpool and Napoli, for which the Rossoneri will need Zlatan Ibrahimovic in good form. They don’t want to overwork the Swede, therefore and as highlighted by Calciomercato.com, Stefano Pioli has two more options.

The injury-riddled Pietro Pellegri is the first one. He isn’t included in the Champions League squad but could play an important role in the ‘less tough’ games in Serie A, such as Salernitana and Empoli.

In addition to the Monaco loanee, Pioli could deploy Rafael Leao in the No.9 role, with Rade Krunic or maybe even Alexis Saelemaekers in the left-wing role. The Portuguese youngster has played a lot lately but has proved to be very important.