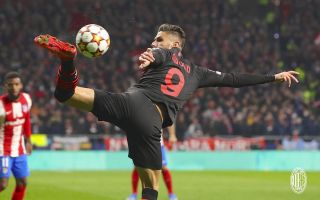 It was an evening full of joy for AC Milan overall as they recorded a win against Atletico Madrid, but there was one negative note in amongst all the celebrations.

This morning’s edition of Tuttosport (via MilanNews) writes that the sweet taste of victory was made a bit more bitter by the injury sustained by Olivier Giroud, who was forced to leave the field in the second half while clutching his hamstring.

A quadruple change came from the visiting team just after the 60-minute mark that as Tiemoue Bakayoko, Alessandro Florenzi, Junior Messias and Zlatan Ibrahimovic came on with Tonali, Krunic, Kalulu and Giroud going off, and it became apparent the 35-year-old Frenchman was struggling.

The first clue came from head coach Stefano Pioli during the post-game press conference as he confirmed Giroud ‘had a problem with his flexors’. Now, the Milan boss is anxiously awaiting the outcome of the instrumental tests that will establish the real extent of the injury.