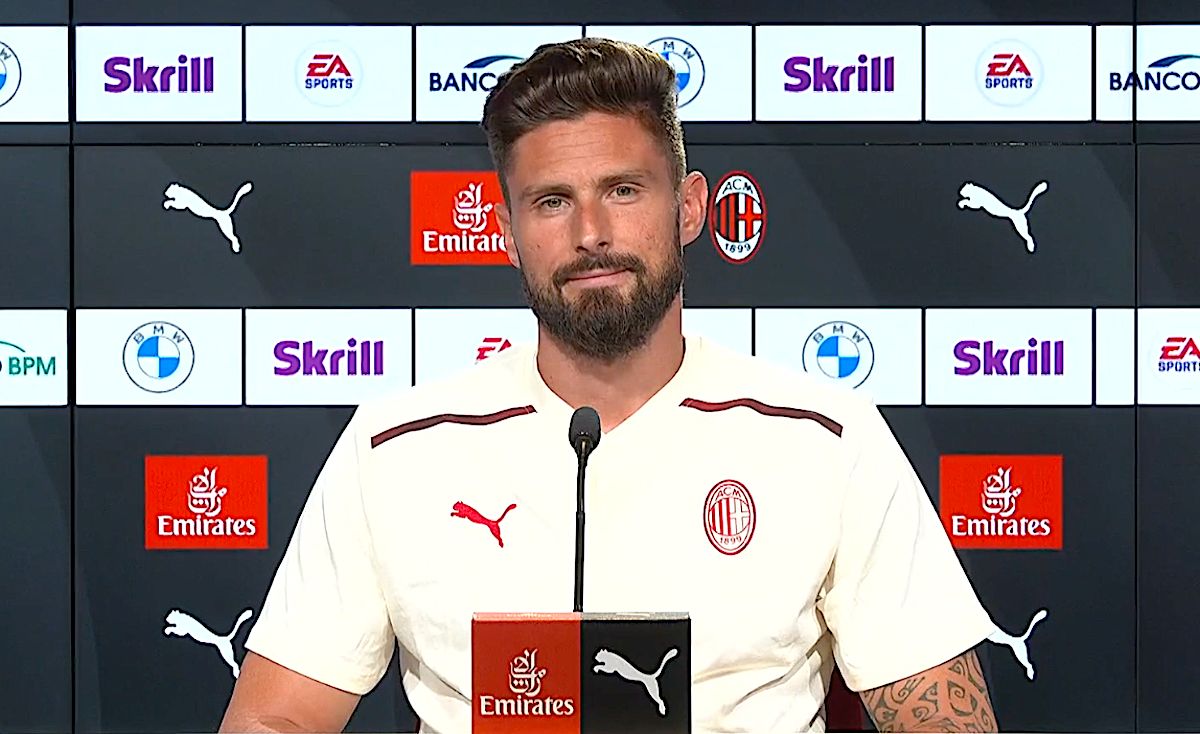 Giroud opens up on ‘dream’ of joining Milan, call with Maldini, No.9 ‘curse’ and trophy targets

New signing Olivier Giroud has revealed that it is an ‘honour’ to join AC Milan, and affirmed his desire to become a ‘big brother’ for the younger players.

Giroud became Milan’s fourth addition of the summer as he arrived from Chelsea, and he brings a wealth of experience as both a World Cup winner and a Champions League winner too. At 34 he has decided to try a new adventure in Italy, joining another decorated striker in Zlatan Ibrahimovic.

The Frenchman marked his debut in the best possible way on Saturday night, heading in at the far post with his first touch of the game to net his first goal for Milan, and now there is a lot of excitement about what he can bring.

Giroud spoke at a press conference to mark his official unveiling as a Milan player and was asked about a variety of different things including his decision to join the club and targets for the season ahead. His comments were transcribed by MilanNews and translated below.

At the European Championships you talked about Milan and you said that you loved some Rossoneri players. Which ones?

“Yes, when I was a kid, I watched Arsenal and Milan for the French players. For me it was a great opportunity to play for these two teams. When I was young I watched Papin and Shevchenko, whom I became friends with and with whom I talked about my future,” he said.

“I also looked at Van Basten who was a legend of this club. For me it is an honour to play in this club where so many legends have played. When Maldini called me on Facetime it was incredible. It is a dream that becomes reality.”

Is concentration your strong point? You seem very attentive to details…

“I believe that concentration is a fundamental part of our sport. My determination and my motivation to bring experience to the team, to help the young players is something that has also characterised me at Arsenal and Chelsea.

“I want to be like a big brother for them and help them during training and explain to them that if you don’t suffer, you don’t really get involved. People remember you as a great footballer but above all as a beautiful person. That’s why I want to bring great professionalism to the team.”

Is Giroud alongside Ibrahimovic an idea that has been proposed or are you ready to face yet another battle for a starting spot?

“First of all I want to say that it’s great to play with great players like Ibrahimovic. Mister Pioli puts the team on the pitch and I can bring experience on the field. I can be complementary with Ibrahimovic, it’s not difficult to understand each other with players like him.

“I’ve already talked to him a few times in training and I asked him how the injury was going. He has a great personality. I’m ready to play with him and show that we can play together. The manager is here to make the decisions and I’m sure we will both bring a lot to the team.”

What technical-tactical movements do you see possible alongside Ibrahimovic?

“As I said before, I’m not the coach and I can’t talk much about tactical details. Playing with great players, however, is not difficult and it’s easy to be on the pitch. I can adapt my game and my qualities to yours. It’s not impossible to play with him at the same time.

“I think recently Ibrahimovic is more of a number 10, a point guard but the question is that Milan have great professionals capable of putting themselves on the line for the team. I am very happy with the welcome of the team. We are working hard for the team and I can’t wait for Ibrahimovic to be with us.”

Do you have a personal goal in addition to bringing experience to the team?

“Of course. In every single club I’ve played in, I wanted to make my mark. I’m here to make my mark, I’ve won a lot and I want to win trophies with Milan. I have goals in my head but I won’t say them. Obviously I want to score. as many goals as possible and help the team. We want to achieve the best for the club and get the most out of it.”

You have won so many trophies and you have had so many successes. What led you to leave a comfort zone like Chelsea and come to Milan? Have you been close to a landing place in Italy in the past?

“I have always said that when I was little I had the dream of playing in the Premier League but I think it was time to discover a new culture and a new country. Milan was the best option for me and I am grateful to be able to wear the Rossoneri colours. I’m happy to be here.

“My time at Chelsea was over also because the manager wanted to play with other players, spending a lot of money on the transfer market. There I realised I had to leave the club and I received a great welcome from Maldini. I’m a Christian and I think God wanted me to move to Milan this season and not Inter the last one and I’m happy with that.”

Milan are back in the Champions League. How stimulating is it to face this competition with the Rossoneri?

“I think Milan are one of the biggest clubs in Europe apart from the fact that they haven’t played in the Champions League in the past seasons. The club is doing a lot to get back to the top, I believe in this project and I am here for this team, which has young players and some experience and I think we can do well in the Champions League. It will be nice to play this competition and it will be even better to do it with Milan.”

“I think raising the pressure is not the right term to use. I’m here because I believe in Milan’s project, giving the best to the team and bringing out the best in them. We know how important Ibrahimovic has been for this team and his career and The trophies he has raised prove it. He is very demanding both with himself and with others. With this spirit you can win on the pitch and in sport. I will do everything to ensure that this also happens with Milan.”

Is the choice of the No.9 shirt to dispel the taboo of the past? Would you like to play with Ziyech?

“As I said in the past I’m not superstitious. I don’t think if I play well or play badly it depends on the number on my shoulders. The number 9 was dressed by footballers like Papin, Inzaghi and Van Basten. I don’t forget that but it won’t be a reason pressure for me I want to make the fans proud of me and the team.

“Ziyech is a great player. We have had a great connection even though we have played few games together. He has a top left foot, has experience and he is very good technically. It would be nice to play with him again.”

Can being an alternative be an advantage for a player of your level?

“I do not consider myself as an alternative. It is the coach who decides how to use me and when I arrived in the club I always had the aspiration to play as many games as possible. Maldini, Massara and Gazidis know my qualities and have given me confidence. I don’t think much if I will play or if I will not play but to give my best for the team.”

Sarri spoke highly of you. Did you speak with him before signing with Milan?

“No, I didn’t talk to him but I heard what he said about me. It’s very nice to hear these words from him and we shared a good season together by winning a trophy, his first. In that season I played a lot, I was the top scorer and for me it was a great satisfaction. I remember him as a great manager and a great man. I hope to have good moments also with Mr. Pioli whom I consider to be a great coach, with great skills and a great person.”

You have won a World Cup, a Champions League and many other trophies. Do you feel undervalued in the face of all these successes?

“You always meet haters on your path but there are also many people who support you. I know there are people who don’t consider me as Messi and Ronaldo but you have to deal with negative opinions. Thanks to my mental strength I went beyond the difficulties encountered in my career and I have tried to transform these negative energies into positive ones.

“It is true sometimes they tell me that I am underestimated but I do not listen to what people say, I do not look at social media to understand if I have played well or badly but I only listen my family and friends and I try to give my best as I have always done in my career. I want to make Milan fans and my family proud.”

Is your adventure at Milan a revenge against the negative opinions from the French press?