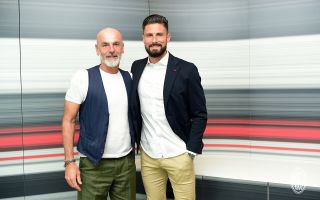 AC Milan striker Olivier Giroud has revealed what has struck him most about working with head coach Stefano Pioli since his arrival over the summer.

Giroud joined Milan from Chelsea during the summer transfer window having become a Champions League winner, the latest step in a decorated career which also includes having won the World Cup in 2018 with France, and so far he has made San Siro his new home in emphatic fashion.

The Frenchman has four goals in seven league appearances with the Rossoneri and all of them came at home, with a brace against Cagliari followed by the opening goal in the comeback win over Hellas Verona and the winner against Torino last month.

Giroud gave an interview to La Gazzetta dello Sport about a number of different topics including how he has settled at the club, Sunday’s derby and playing alongside Zlatan Ibrahimovic, and he was also questioned about Pioli.

“What struck me about Pioli? The energy. He transmits positive strength, but not only this: he is close to the players and if he has something to say, he says it,” he said (via MilanNews).

“And tactically he is very good because he also knows how to adapt to his opponents. He should improve in English and French (laughs). I’m joking, among other things, his French is good.”