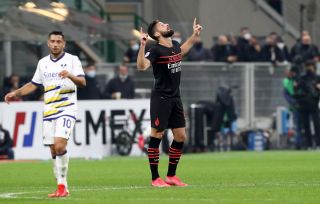 Giroud reveals what Pioli told Milan at the break and says: “I’m at 90%”

Olivier Giroud was a big part of Milan’s turnaround this evening as he scored the goal that pulled them back into the game. It seems he has left his injury struggles behind him and tonight we saw how important he can be.

The Frenchman scored a trademark header in exactly the right moment as it gave Milan the energy needed to get back into it. That’s exactly why the Rossoneri signed him in the first place and it’s nice to see him succeed.

In an interview with DAZN after the game, as cited by MilanNews, Giroud shared his thoughts on the situation. He admitted that he’s waited a long time to be back on the pitch but also stated that he’s not at 100% yet.

What went through your head after the goal under the Curva Sud?

“I’ve waited a long time for the return to the field. In the first half, it was difficult to get into the game, but the reaction in the second half was very important. We are ready to show a reaction altogether.”

“I’m at 90%, I feel almost free. It is important to me, I have felt too much frustration during the past games. I always feel better, tomorrow I’ll be even better. Now I need to go to the locker room with my brothers.”

What did Pioli tell you at the interval?

“We lacked aggression, determination and quality, he told us that in the second half we could only have done better. And we did it “.

You also learned to gesticulate in addition to Italian…

“Yes, gesticulate. The referee doesn’t listen to me, so I use gestures (laughs, ed) ”.

Hopefully, Giroud will leave the injury struggles behind as he will be an important player for Milan. He has a nose for goals and his experience is crucial for what is a very young Rossoneri squad.

READ MORE – Watch: Castillejo in tears at the end of Milan’s win over Hellas Verona