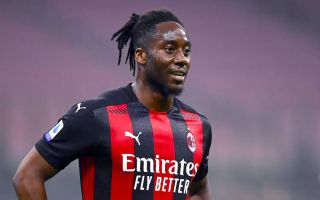 Giveaways, passiveness and lapses in focus: Why January signing Meite has fallen short of the mark

As the January transfer window arrived, AC Milan were locked in a title fight with Inter and had legitimate Scudetto aspirations.

Stefano Pioli’s side needed improved depth, so the club brought in Soualiho Meite on loan from struggling Torino, despite the fact that the French midfielder appeared to have fallen out of Marco Giampaolo’s starting eleven.

At his best, Meite provides a solid defensive presence and helps his side retain possession to build offensive chances. In Giampaolo’s 4-3-2-1, Meite fit as a functional, possession-driven midfielder who helped connect the defensive-minded Tomas Rincon with the more creative likes of Karol Linetty and Sasa Lukic.

Apparently brought in to be a substitute for Franck Kessie, the Frenchman is poorly suited for Pioli’s 4-2-3-1, in which the two deep midfield positions are crucial to success on the pitch. Kessie provides excellent distribution and a powerful shot, while his partner Ismael Bennacer builds attacks from the back of the pitch. Both also serve as quality defensive protection above the backline.

Conversely, Meite is not a distributor, and though he occasionally flashes defensively, he is inconsistent and often finds himself out of position. The midfielder has some creative talent, but mostly uses it to keep possession, rarely sparking counter attacks or goalscoring chances.

Meite averages 51.08 touches per 90 minutes, an astoundingly low rate for a midfielder. When he does possess the ball, the midfielder often returns it to the backline, and is in the 14th percentile for progressive passing yards among midfielders.

At Torino and Milan this season, Meite’s biggest flaw has been his inadequate offensive and defensive involvement. The 26-year-old lacks the work rate of players like Kessie, who is a genuine box-to-box midfielder and is involved with play at every stage of a match.

Take this random, but telling play for instance. A poor giveaway by Theo Hernandez sparks a sudden chance for Udinese. Kessie and Pierre Kalulu immediately recognise the danger and sprint back to goal, while Meite (wearing the 18 shirt), who is much closer to the play than the others, remains stagnant outside the box, and watches while Ilija Nestorovski nearly heads the ball home.

Defensive positioning is another major flaw in Meite’s game, which is most evident when the midfielder serves as a replacement for Bennacer, whose defensive acumen has been a major asset for Milan.

In this sequence, Meite initially leaves Pedro Obiang unmarked in the middle of the pitch, and realises his mistake once the Sassuolo player receives the ball. He fails to properly step to his man, allowing Obiang enough time and space to play a through-ball into Milan’s box. The play is recycled, and Meite then exacerbates his error by leaving Domenico Berardi unmarked, and then promptly fouls the Sassuolo captain.

His negative qualities aside, Soualiho Meite has legitimate upside to his game, and in another life could have been a much better player. He is an above average tackler, is dominant aerially and occasionally flashes creative talent. He performed well in matches against Verona and Crotone, but ultimately has not been in good enough form to justify a permanent transfer to the San Siro.

Milan’s front office had a chance to bolster the Rossoneri’s depth over the January window, and, outside of the acquisition of Fikayo Tomori, it largely failed to do so. Taking Meite on loan and giving him significant minutes in the Europa League and Serie A, is just one of the many explanations for Milan’s second-half collapse, which may ultimately cost Stefano Pioli his job.

A very telling stat that summarises Meite’s short time with the club is as follows: Milan have won just two of the twelve matches in which Meite has played for at least 20 minutes.

*All advanced stats courtesy of FBref.com

READ MORE: Donnarumma admits desire to win ‘as many trophies as possible’ and insists fans ‘help you in times of difficulty’