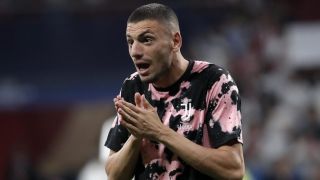 AC Milan are still interested in a move for Juventus defender Merih Demiral, according to the latest reports.

The Rossoneri have so far been inconsistent at the back this season, having kept just one clean sheet in their last eight games.

Part of the problems are at centre-back, where Mateo Musacchio has been disappointing so far while Leo Duarte has seemingly not done enough to convince.

Recent reports have suggested the a move for a new centre-half could be on the cards in January, but that a lot depends on Mattia Caldara’s return from injury.

Should that not go to plan, Calciomercato.com rcently reported that Milan could target one of Juventus duo Daniele Rugani or Merih Demiral.

According to Goal Italia’s Romeo Agresti, the Diavolo saw a €35m big for Demiral rejected during the summer along with LaLiga giants Atletico Madrid.

Juve apparently wanted to start the season with five centre-backs on their books, something which has proven to be a wise move given Giorgio Chiellini’s injury.

However, Demiral has struggled for game time and as such Milan could go back in with another bid in January, the report adds.

Bleacher Report’s Dean Jones recently claimed that Demiral is open to moving in the winter, with Arsenal and Manchester United interested.