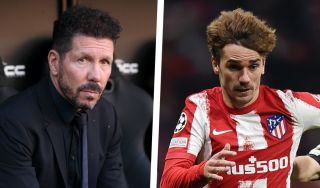 Griezmann and Simeone admit Milan edged game against Atletico: “They were superior”

Atletico Madrid star Antoine Griezmann has conceded that AC Milan were the better side and deserved to win last night’s game at the Wanda Metropolitano.

Milan won 1-0 thanks to a goal from Junior Messias inside the final few minutes as the Rossoneri management to keep their Champions League journey alive going into the final round of group stage action, having climbed to third. They must now beat Liverpool and hope for a draw in the other game between Atleti and Porto.

Griezmann played a part in the game having seen his two-game suspension reduced to one but he was kept quiet by Simon Kjaer and Alessio Romagnoli. He was interviewed after the game and his quotes were relayed by il Corriere dello Sport in their paper edition today, and then by MilanLive.

“Milan studied us well. Our match plan didn’t work at all. They were superior. We just have to improve and hope to do better in the last match of the group against Porto,” he said.

The plan he is referring to is of course the one that head coach Diego Simeone sent them out with. The Atletico Madrid boss reflected on the game during an interview with Amazon Prime Video.

“It was a tough match, very tight. We tried both teams to break this toughness. In the first half we had a few dangerous situations, with two shots by De Paul. In the second half they were close to the goal on a dead ball, us with De Paul,” he said (via MilanNews).

“Then on the details: they took advantage of a good situation in attack, we missed the chance to draw with Cunha. The Champions League does not forgive, but it is right with those who deserve it go through. Now let’s go to play the last game: whoever deserves to pass will certainly be in the round of 16.”