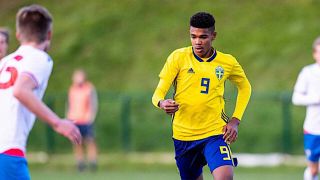 Hammarby director: Roback to Milan is ‘underway’ but ‘there are more clubs involved’

In recent days, it has been reported that Hammarby striker Emil Roback is set to join AC Milan.

SportExpressen reporteer Daniel Kristoffersson reported earlier in the week that Milan are about to sign Roback from Hammarby – the club where Zlatan Ibrahimovic is part-owner.

TMW then followed up by stating that Roback will join for a fee of around €1.5million, with Arsenal having followed him for a long time with their scouts in Sweden.

At home he is defined as one of the brightest talents, so much so that he has already made his debut with the senior team.

He has also been captured in photos in central Milan where he conducted a medical examination before moving to the Serie A giant.

After Hammarby’s 2-1 victory away against IFK Norrköping on Thursday, the club’s sports director Jesper Jansson confirmed that a Milan move is underway but isn’t final.

“It’s clear that the deal is underway, this isn’t a secret. But we’ll see. It’s sort of up to the player, there are more clubs that have been after him,” he told Fotbollskanalen.

Q: So it’s not completely done yet?

“It isn’t before we have announced it.”

Q: Is Ibrahimovic behind Milan’s interest?

“No. Not more than the fact that they know each other since he has trained with us. But Emil raised the attention before and there are more clubs involved.”

Q: You don’t think Ibrahimovic put in a good word for him?

“What can I say? No idea. Of course, they would have been stupid not to ask him.”