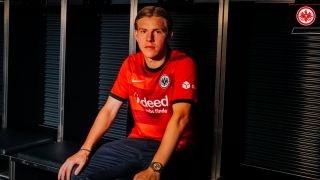 Hauge reacts to Eintracht move: “I am very happy to be here and to take my next step”

Jens Petter Hauge has revealed his delight after officially sealing a move to Eintracht Frankfurt from AC Milan earlier today.

A statement in the club’s official website this morning has confirmed that the deal has gone through, with the formula being an initial season-long loan that would become a permanent purchase upon the occurrence of certain conditions.

Hauge spoke to Eintracht’s official website as part of the announcement of the move, and expressed his happiness at taking the ‘next step’ in a young career that has already seen him play in Norway, Italy and now Germany.

“I am very happy to be here and to take my next step. Eintracht Frankfurt is a big traditional club and has already caused a stir internationally. I’ve followed the appearances in the Europa League and can’t wait to wear the Eintracht jersey myself from now on,” he said.

The 21-year-old played 24 games for Milan across all competitions contributed five goals, and that move came after he impressed in his home country with Bodo/Glimt, catching the eye during a Europa League qualifier. Now, though, his adventure at Milan will end after just one season.

READ MORE: Milan targeting two signings for the attack that could cost under €10m – the latest