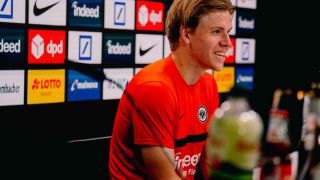 Jens Petter Hauge has issued a reflection on his time at AC Milan including what he learned from a figure such as Zlatan Ibrahimovic.

Hauge has had a whirlwind last 10 months, as he entered the field for a Europa League second round qualification game against Milan at the San Siro and – after amassing a goal and an assist in that game – a few days later became a Rossoneri player.

After impressing a lot in the first half of the season including being the top scorer in the Europa League group stages for Milan, things were looking up for the 21-year-old. However, he played very little in the second half of the season as head coach Stefano Pioli seemed to lose faith in the Norwegian.

The result was that Hauge left Milan a few days ago to start a new adventure with Eintracht Frankfurt in the Bundesliga, and he spoke a few days before his debut in the German league, where he will face compatriot and friend Erling Haaland’s Borussia Dortmund.

“I’m in good shape, even if I didn’t play many games last season. I trained well and worked very hard, but to reach the best condition I need to play,” he said (via MilanNews).

Hauge was asked about the importance of Ibrahimovic, who helped translate for the youngster as part of his adaptation.

“He taught me a lot. It’s amazing how he trains, raises the bar and always gives 100%. With him you can’t afford to miss anything, especially the simple things. At Milan I learned a lot too, even if I didn’t play a lot. But the feelings, looking back, are good,” he said.

Hauge also revealed that he spoke to Ante Rebic, who actually made the same move but in the opposite direction, joining Milan from Eintracht in summer 2019.

“Ante told me he has to work hard and I have to enjoy my time here, because the club and the city are great.”

READ MORE: Milan’s probable XI to face Panathinaikos – strong side with one doubt for Pioli to resolve