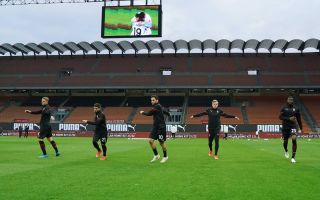 Hauge showers ‘Viking’ Kjaer with praise: “Everyone respects him when he talks”

Jens Petter Hauge has spared some very flattering praise for his team-mate Simon Kjaer during an interview with a Norwegian newspaper.

When Christian Eriksen collapsed on the pitch during Denmark’s opening game of the European Championships, Simon Kjaer acted in the best way possible. In addition to quickly notifying the medical staff, he formed the wall around his team-mates and consoled his wife.

And it seems that there would be no objections to that from the other Milan squad members, at least based on what Hauge has said. He spoke during an interview with Dagbladet about what it is like playing alongside Simon Kjaer, with his comments transcribed by MilanEye.

“He has a high standing at Milan. Everyone respects him when he talks. You always listen when he has something to say. At Milan we all call him ‘The Viking’ because that’s what he is,” he said.

“Of course it’s natural we [Hauge and Kjær] speak a little bit more than with the others because we both speak our mother tongues. He is taking good care of me, he tells me what I need to do and gives me credit when I do something good.

“He [Kjær] is always there and gives you an extra push when he sees things that can be a little bit better. He can help you both on and off the pitch.

“It was an extremely difficult situation for everyone but he remained calm. Simon managed to unite the team and took responsibility.

“He saved Christian’s life and it was an extremely powerful moment for everyone. I was not surprised, when something like that happens he shows what kind of a leader he is.”