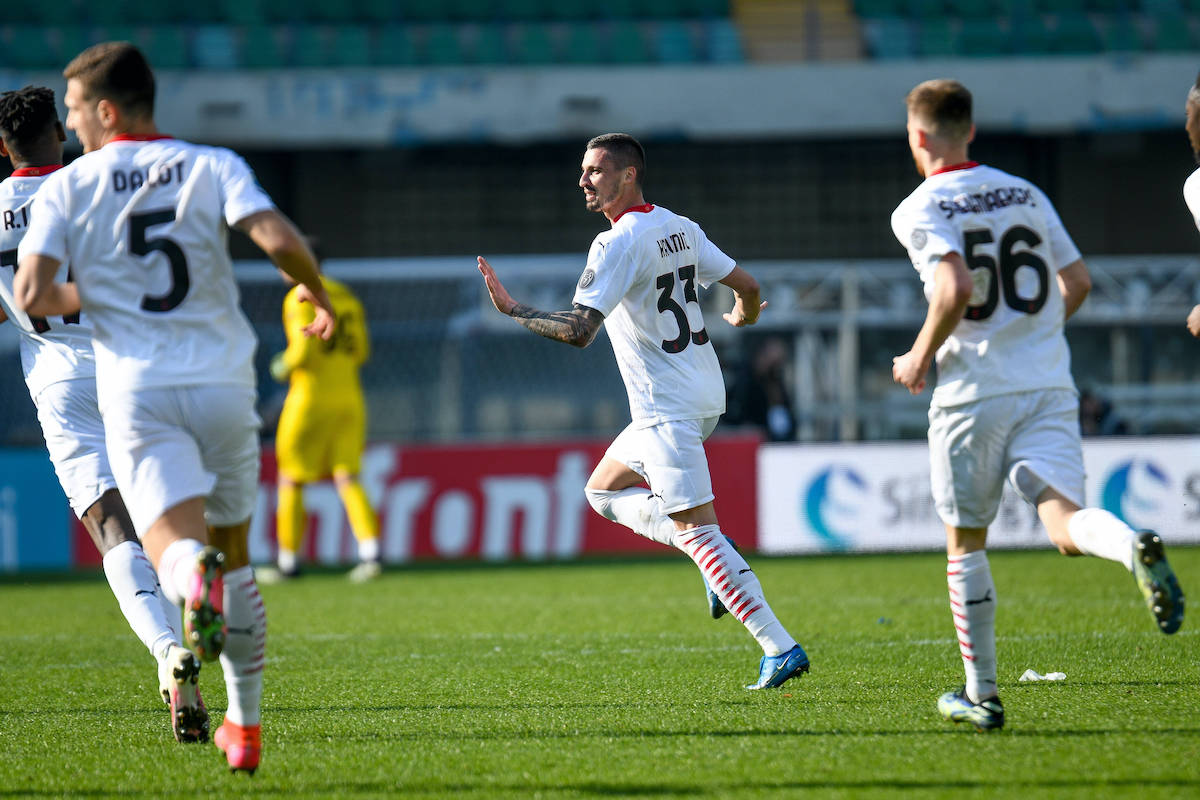 A depleted AC Milan managed to secure a crucial 2-0 victory against Hellas Verona at the Stadio MarcAntonio Bentegodi on Sunday afternoon to boost their top four hopes.

In a plucky first half it was a wonderful free-kick from Rade Krunic that gave the away side the lead as he picked out the postage stamp from just outside the corner of the box.

Early in the second half the Rossoneri made their lead a commanding one through another unlikely source, this time Diogo Dalot storming through and finishing emphatically after a neat dummy.

The clean sheet would also be a hugely satisfying note for a Milan side struggling with injuries and also low on confidence after a difficult 2021 so far, with the pressure back on Inter ahead of their game against Atalanta on Monday night.

The injury bug hit Milan in the days leading up to the game as Zlatan Ibrahimovic, Hakan Calhanoglu, Mario Mandzukic, Ismael Bennacer, Ante Rebic and Daniel Maldini were all left out of the squad, while Theo Hernandez and Sandro Tonali were not fit enough to start.

That meant that there were chances for the likes of Diogo Dalot, Soualiho Meite, Rade Krunic and Samu Castillejo, while Fikayo Tomori was entrusted with the responsibility of partnering captain Alessio Romangoli at the back.

The home side started the game on the front foot as Milan struggled to play out of the press, and Tomori had to be alert early to deny a cross from Faraoni that Lasagna moved to meet at the near post.

The Rossoneri’s first attempt on goal came when Saelemaekers sliced a volley wildly over the bar from outside the box, while moments later some nice pass-and-move football ended with Castillejo glancing a header wide from a Castillejo cross.

At the other end Lasagna’s pace in behind continued to cause problems and the former Udinese man capitalised on a weak header back towards Donnarumma, nudging it over the Milan goalkeeper before Romagnoli ran around to clear in the nick of time. Donnarumma was seen holding his hamstring after the incident, but played on.

Rafael Leao had a big chance to open the scoring for Milan inside the 15th minute as a peach of a cross from Calabria on the right found the head of the Portuguese forward, though he could not keep his attempt downwards and it sailed a few yards over the bar.

Magnani went into the book for the home side and it was a sacrifice worth making as Krunic had latched on to a return ball and had burst past the defender into the box, with the free-kick awarded right on the edge of the area.

However, Krunic would dust himself down and take the resulting set piece, beating Marco Silvestri in the Verona goal with a fierce curling effort into the top corner at the far post to give Milan a 1-0 lead.

The Rossoneri had a couple of chances to double their advantage either side of the break as Krunic fed Leao who fired with venom towards the near post but narrowly over, while Meite also hit his effort over the bar having spun his man around 20 yards out.

Milan start the second half well on top and they got a goal inside the opening five minutes to double their advantage. An inwards pass from Saelemaekers looked like finding Leao, but he occupied his man and Diogo Dalot allowed the ball to roll inside the box, firing past Silvestri first time with a thumping finish into the roof of the net.

Milan clearly smelled blood and went in search for a third goal that could well have killed the contest early, and Saelemaekers fired close a few minutes after the second goal as the Diavolo kept up their excellent tempo.

The home side made four of their five permitted changes before the hour mark, with the creative duo of Zaccagni and Barak interestingly among those to make way.

Silvestri nearly got caught out when a low ball from the outside of Saelemaekers’ boot intended for Krunic drifted through and almost wrong-footed the Verona stopper, who recovered to claim the ball at full stretch.

Milan’s excellent game management continued to ensure that the game remained in their favour. While there was hardly a string of chances, the Diavolo managed to frustrate their hosts, who didn’t manage a decent attempt until the 77th minute when Dimarco’s shot deflected wide for a corner.

The resulting set piece was cleared back out to Dimarco, who whipped in a peach of a ball onto the head of Ceccherini who somehow glanced his free header wider from about 10 yards.

A change followed as Jens Petter Hauge was Milan’s first introduction, coming on for Castillejo.

Salcedo was one of the players introduced for the home side and he should have done much better than shooting wildly over the bar in space 20 yards out. Ceccherini would again glance a free kick wide of the far post not long after and Krunic would clear a header from a corner at the near post in what would be the last half-chances for the home side, with Milan wrapping up a comfortable win.