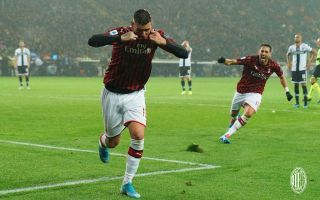 Hernandez at risk of suspension after yellow card against Parma

Following the yellow card against Parma, which he received for celebrating the winning goal by taking off his shirt, Theo Hernandez is now at risk of a one-game suspension.

The French left-back scored the decisive goal in Milan’s 1-0 win against the Gialloblu, finding the back of the net in the dying minutes of the game. During the celebration, right by the Rossoneri fans, he took off his shirt.

As a result of this, he was given a yellow card by the referee, taking his tally up to four warnings for the season. Should receive a fifth, then he will be suspended for one game, as the sporting judge revealed in the official report today (via MilanNews.it).

The Rossoneri will take on Bologna, Sassuolo and Atalanta in the next three games. Therefore, it might be wise to take a yellow card against Bologna, as he wouldn’t want to miss the important clash in Bergamo.

READ MORE: Individual work for Paqueta today; when he could be back in training